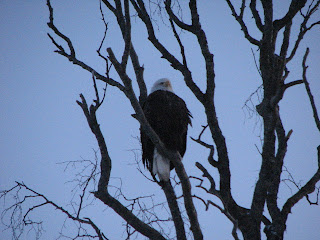 My grandfather and I were walking along the shores of Lake Michigan in the late 1960’s when Grandpa pointed into the air and exclaimed excitedly, “A bald eagle!  I haven’t seen one of those around here for years!”

It was a rare sighting, and I was as thrilled as the old man. I had never seen a bald eagle in the wild. Grandpa went on to explain how, when he was young, bald eagles were commonplace. By the 1960’s bald eagles were teetering on the brink of extinction in areas where populations had historically been high.

Alarm over the possible loss of our national symbol prompted a concerted effort to save the bird. The precipitous decline in the population was, by the time Grandpa and I saw that eagle, linked to the use of the pesticide DDT. The use of DDT was banned (along with other protective measures), and the recovery of the bald eagle population has become an unparalleled conservation success story. 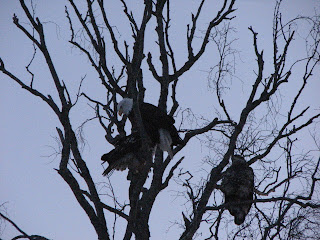 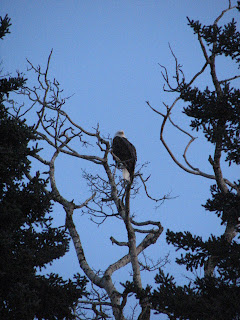 Over half of the world’s bald eagles live in Alaska. Seeing a bald eagle is often a highlight for visitors to Alaska. Words such as magnificent, inspiring, majestic, regal and thrilling escape their mouths as they gape awe-struck. 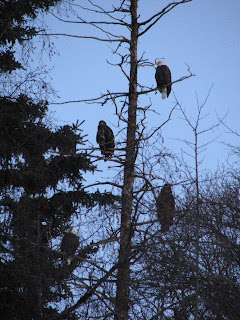 Those words, in all likelihood, never escaped Benjamin Franklin’s lips in reference to the bird. When the bald eagle was adopted as the national symbol in 1782, Ben had this to say:  “I wish that the bald eagle had not been chosen as the representative of our country, he is a bird of bad moral character…  too lazy to fish for himself, he watches the labor of the fishing-hawk, and when that diligent bird has at length taken a fish… the bald eagle pursues him and takes it from him....”

I would have to agree with Dr. Franklin. Bald eagles, while attractive to the eye, are no better than buzzards with an exceptionally good public relations firm.

Ben wasn’t one to identify a problem without offering a solution:  “For a truth, the turkey is in comparison a much more respectable bird, and withal a true original native of America…”

While I certainly can’t say so with any authority on the subject, I suspect the turkey lost out primarily on culinary grounds. My guess is that nobody really wanted to eat the national symbol on Thanksgiving, or Christmas. Good heavens! What would the French have said, let alone the British? It would have simply been, for want of a better term, tasteless. Such a social conundrum would have necessitated finding a substitute for the main course on the fourth Thursday of every November, although one pops immediately to mind.
“Honey! When you’re shopping for Thanksgiving dinner, don’t forget to get an eagle.  I prefer the Butter-bald brand.”


To substantiate old Ben’s estimation of the bald eagle, I offer a couple of true stories.

In terms of “bad moral character,” the bald eagle is less than tactful. A friend of mine was once on the Homer Spit when an eagle swooped down and snatched a small dog (some kind of pocket-poodle, or other yappy micro-breed) out from under its mistress’s watch.  That was bad enough, but the eagle didn’t bother to fly off with it.  It went back to its perch atop a light pole and began devouring the dog in front of its nearly apoplectic owner. Adding to the unpleasantness was the fact the dog was not dead, and apparently protested loudly for quite some time.

My wife went to work one morning a few years ago, and one of her co-workers commented on a bald eagle that swooped very close in front of her car on the way to work. With bald eagles being common in the area, her comment elicited nothing more than a few bored comments such as, “So? That’s happened to me lots of times.” Her reply indicated her experience had been truly different. “Yeah, but I’ll bet none of those eagles were carrying a cat.”

As far as being lazy, bald eagles take it to an art form. My wife and I were fishing from the bank at the mouth of a local river one April. For company, there was another fisherman about twenty yards from us, and a bald eagle sitting on a buoy out in the river. While we chatted with the other fisherman, the eagle left its perch, landed on the beach and very slowly crept toward our bait bucket. The bird kept his eye on us while stealthily sneaking up on the bucket. Whenever we would glance in the bird’s direction, it would crouch lower and turn its head away. Watching it out of the corner of my eye, I saw the bird resume its quest for our herring as soon as it thought we weren’t looking.

“Watch that sombitch,” the other fisherman warned us, “he cleaned me out yesterday while I wasn’t looking.”


So, where is the best place to go and see bald eagles? It’s a frequent question from visitors.  My answer is always the same:  the local landfill, or dump. In fact, all but one of the pictures in this post were taken at the dump, this morning (you can guess which one). Hey, easy pickings beat chasing a “fishing-hawk,” or wrestling with cats. 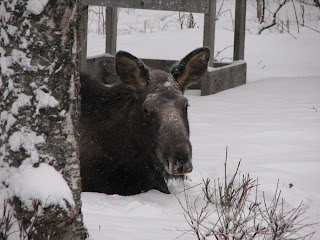 This is our gardener, Moose.  Moose is a Gemini.  She likes taking long walks in the woods, romancing bulls, antagonizing small dogs and trimming expensive exotic shrubbery.  Her favorite music group is Baha Men, especially “Who Let the Dogs Out.”  She does not like constructive criticism, suggestions on her diet, bears, snow blowers, or marbles sent in her direction by slingshot.  (She’s not that fond of old geezers walking in the driveway to get the paper early in the morning, either.)
Moose works cheap – room and board is all she asks.  Unfortunately, the board part gets a little spendy at times, particularly when it involves hybrid roses, white lilacs, or the cotoneasters she’s admiring in the picture.
Moose is a workaholic.  She will spend entire days, followed by entire nights, working her little heart out to ensure our yard does not get overgrown with shrubbery.  She prefers working in the yard during the winter months, but will put in overtime during the summer, if needed and the urge strikes her.  Moose is an over-achiever in many respects.  In years past, she has single-hoofedly thinned out our tulips… over 100 of them in one sitting… er, standing.  She has, with unabashed enthusiasm, trimmed two of our Canadian cherry trees into broken stumps.  The remnants of one spirea – still struggling valiantly to recover from her handiwork of three years ago – serves as silent testimony to her unyielding pursuit of pruning perfection.

I mention all of this because I think it’s time that Moose seek employment elsewhere.  So, if you are looking for someone to do a little shrubbery trimming, I will give Moose the heartiest of recommendations.  She truly wishes to be an asset to somebody.  (And I truly wish she’d quit being a pain in my asset!)  Please leave your address in the comments and let me know where to send her… ASAP, as I’m running out of marbles.

Seasons change quickly in Alaska.  Although a common observation of the seasons in the Great Land goes, “Early Winter, Mid-winter, Late Winter and Next Winter.”  It’s really not quite that bad, as evidenced by the fact things thaw enough for a couple of months that the Alaska Department of Transportation can impede traffic on the highways with construction.
However, when the seasons shift gears it’s a speed-shift, with very little pause for the use of a clutch.
When I left home to visit my dad in Arizona for a little less than three weeks – October 17th through November 3rd – the temperatures were still climbing into the upper forties and the weather was clear and beautiful.  There were still a few straggling leaves on the trees, and nothing was frozen over.  Creeks flowed, ponds were open, and trumpeter swans dotted most of the marsh waters along the trip to Anchorage.
When I got home on the November 4th, the temperatures were climbing into the lower twenties, and a thin layer of snow covered the ground.  Our recording thermometer showed the ambient temperature had dropped to -9 F at one point.  Ka-thump!  Winter has arrived.
Along with the cooler temps, we’ve had snow.  In the past ten days we’ve had about eighteen inches of the light, fluffy stuff.  I’m not complaining.  I like winter; the cold, the snow.  (I know, I’m sick, but there you have it.)
One of my favorite conditions in winter is the perfect combination of clear weather and a full moon on fresh snow.  This past Friday we had just that.  The snow reflects the moonshine efficiently enough that it literally seems like day.  The big difference is the light is surreal.  There are no colors, only shades of grey and black.  Depth perception, even when looking at close objects, can be deceptive.  One looks at a stand of spruce and has to honestly ask, “Which of those spires is closer?”  The answer is found by looking at the shadows, not the trees themselves.  Nights like that make for perfect walking.
Years ago, I used to work a schedule of a week on/a week off, 12-hour shifts.  The shifts alternated between working 5 am to 5 pm and 5 pm to 5 am.  “Swinging around” from the night shifts often found me awake in the middle of the night.  In the winter, during a full moon, it was the perfect time to go for a walk, then come home to warm up and write.
Winter’s Night Walk
It’s the quietude
And solace that appeals
When hollows reflect
In light that’s deep.
In late-night winter’s woods awake,
When most the world around’s
Asleep.
I like to walk then.
With cheeks that glow
Against the wind,
With breath that floats
And glides away...
When daytime rules of light
Rescind
And snow ghosts jump
From tracks I lay.
During a frigid, full and frosted moon,
As it leers in eerie light,
Black outlines cast
On blue-tinged snow
Create a two dimensioned sight.
Where distance perceived
And specters seen
Are not as they appear
In the whitewashed world
That’s not quite clear...
Of a lonely winter’s night.
Posted by A. E. Poynor at 10:32 AM 2 comments: