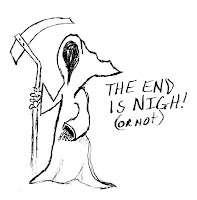 Since before the beginning of recorded time people have been predicting the rapidly approaching end of the world. I’m sure that somewhere, painted or etched into a cave wall, there is an image of a stick figure, possibly standing on the edge of a cliff, or perhaps staring into the maw of a sabre-toothed tiger. Loosely translated, such an image could mean, “The end is near.”
The most recent hub-bub concerning the imminent demise of our world is accredited to the Mayan calendar. The calendar has an end. The end (according to the most recently accepted translation) is December 21, 2012. As would be expected, such a dire prediction not only gives pause for thought, but raises serious issues that transcend the simple concern of the sun missing one of its planets. For instance, does Santa know? How will that impact the college bowls? Will we miss the final episode of, “The Kardashians: Life as a Train Wreck”?
All I can say is I’m glad we’ll make it long enough to see the final installment of the “Twilight” movies! (Not. Perhaps we should move the date up a month, or so.)
I have pondered the proclamation of gloom and doom for 2012, and have come up with several solid reasons why the prediction can’t be correct.
First off, if modern science, with all its technological advances, can’t figure out how Donald Trump gets his hair to lay like that, how could we reasonably expect an ancient culture to have determined the end of the earth? Secondly, if the world ended, so would the bureaucratic BS emanating from Washington, D.C., which is entirely impossible.  And if all of that isn’t enough to assuage your fears, consider this: Chuck Norris hasn’t given his permission for the world to end.
And too, there is the minor little problem of the calendar itself.
The calendar flashed about on most of the doomsayers’ declarations is not the Mayan calendar, but the Aztec calendar. A subtle difference, to be sure, but worth noting. The Aztecs weren’t as mathematically advanced as the Mayans. Apparently, the Mayans didn’t fall asleep during their ninth grade algebra classes, as the Aztecs did. As a result the Aztecs weren’t as precise in their calculations. All this calls into question the veracity of the expiration date stamped on the earth.

However, what really convinces me the earth will not end on December 21 of this year is the recent translation of a small tablet found laying near the calendar in question. Initially thought to be simple notes (Algebra 1 crib notes?) it took years for the experts to decipher it. However, it goes something like this:
“Hey Boss – I only got to December 21, 2012 before my carpal tunnel started acting up. We simply MUST do something about the repetitive motion stress issue before I can continue.
Sincerely,
Bob
P.S. – That Spanish chap dropped by again to say he’s moving into the neighborhood. Between you and me, I don’t like the looks of that guy.”