I whined about the weather a couple of weeks ago, I know, but things have gotten so bad, the activist group Alaskans for Global Warming has announced plans for an “Occupy The Weather Service” movement.
Bottom line: if you don’t like the weather… move. Better yet, just get out and into it. That’s the idea behind the annual Peninsula Winter Games that took place this past weekend. It’s a celebration of winter, with all sorts of activities, both inside and out. It’s a way to break the cycle of cabin fever.
By far, my favorite part of the event is the ice carving. Various businesses sponsor the carvings. It’s amazing what talented guys can do with a chainsaw, chisels and rasps.
What is even more amazing is the sculptures seem to appear from out of nowhere. It’s as if the ice blocks are transformed by ice gnomes in the middle of the night. One day a huge chunk of ice is dropped off, and mystically a sculpture evolves in a day, or two. One rarely sees the carvers working. I saw one pair of carvers in the daylight this year. Between the time it took to dash home to grab the camera and return, they had vanished.
The carvings usually reflect the sponsor’s business: a giant ice beer mug in front of a bar, frozen super-sized fries in front of a fast food joint, a leprechaun in front of clothing store with an Irish name. 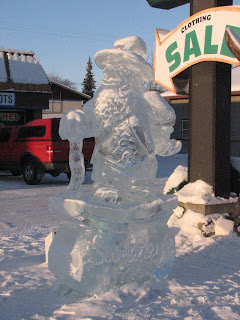 This year, two dentists decided to get in on the fun. One went with the toothy Bugs Bunny. Who doesn’t like the “wascally wabbit?”  Very apropos, and also kid friendly. 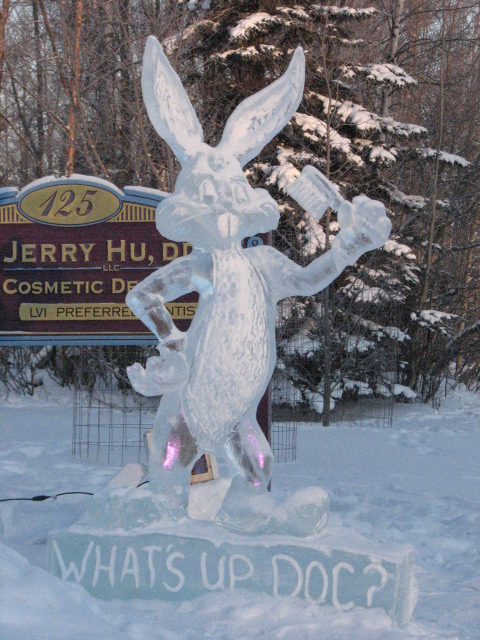 The other dentist went for something flashing teeth too. It’s an… uhh… a… I dunno, scary rat thing. Obviously, the sponsor either didn’t make the plan clear, or they are determined to deter any clients under the age of twelve.  Or, maybe, it’s a scare tactic.
“Brush your teeth every day, or Mr. Rat will visit… late at night.”
Hey, whatever works to get the kids to brush their teeth, I guess. 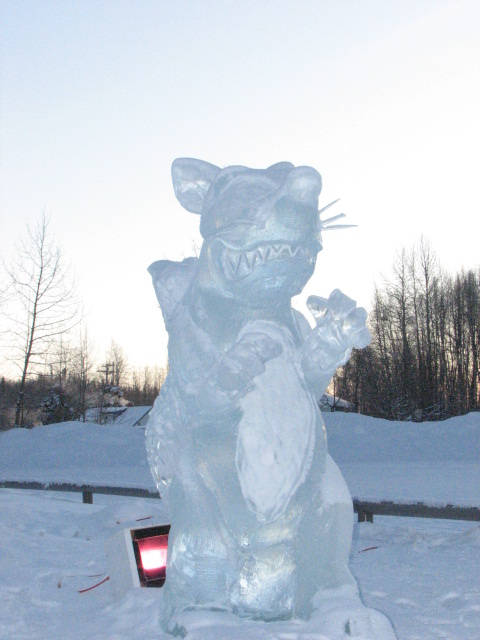 There are even carvings you can sit on... just not very long.They are very popular with the kids.
The ice carvings are a sacrifice of sorts. The only thing that can hurt them is warm weather, therefore they should bring warmer weather. I’m relieved to say it’s worked. We are above zero, finally, and may even get close to the magical melting point in the next few days.
Thank goodness! I wasn’t looking forward to camping out in front of the Weather
Service. 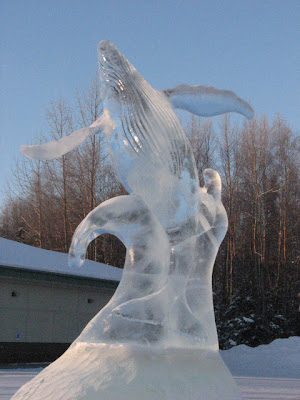 This is, by and far, my favorite carving this year.  The picture doesn't capture all the reflections of light resulting from the lines carved on the breaching whale. It also doesn't show the intricate barnacles on the body.  It was masterfully crafted.