The Weather Service and the Winter Wonderland

I missed last week, but have an excuse: the weather ate my post. Right now, as I write this, it’s -28 degrees Fahrenheit (-33 Celsius for those who prefer metric), and according to the Weather Service, there’s little chance of improvement in the near future. The wonderland part of winter this time of year involves wondering why we live in this land during the winter.
I’m just tossing this out, but wouldn’t the name Weather SERVICE imply an effort at making us, the weather consumers, happy? I envision going to the Weather Service, sitting at a table and actually having a chance to order up some weather.
“Hello, my name is Bob, I’ll be your weatherman today. What can I get for you?”
“Let me see… I’ll start with the sunny morning special, and follow it up with a mid-day high of twenty above zero. Let’s finish off with a gentle snow, followed by clearing skies – hold the wind.”
“Very good. And for dessert, sir?”
“Yes… let’s have an aurora borealis, heavy on the red hues, and swirled gently.”
“Excellent choices, sir. I’ll get those out to you immediately.”
Right. What the Weather Service has actually been serving us lately is tantamount to endless helpings of frozen cauliflower and broccoli containing lots of stems. Between spates of extended sub-zero temperatures we’ve been blasted with significant snowfall.


Surprising discoveries are made when the mercury heads south, such as windows that weren’t fully latched and sealed in the fall. Any moisture in the house condenses, then freezes along the poorly sealed windows; sometimes in bizarre shapes. I wondered why there was a slight draft in the living room. Oops, didn’t latch the window last fall. (NOTE TO SELF: If we get a little thaw, close the damn window all the way! Until then, keep the curtains drawn.)
Deep questions come to mind when driving after continual snowfalls. Aren’t there supposed to be lines on the roads? Which is my lane? How did they make the road so shiny? It becomes a matter of blind faith and following the tracks of the first brave driver that made their way down the lane. Eventually, the ruts get deep enough that steering is an optional expenditure of effort, except when jumping from one set of ruts to another. 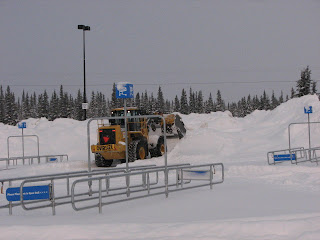 Another interesting dilemma is where to put all that snow. Parking lots for public places present a real challenge.
“George, did you finish calculating the parking lot for the Walmart in Kenai?”
“Yeah, about ten acres… two for parking vehicles, and eight for stacking snow.”
“I don’t know, buddy, that’s mighty skimpy for the snow.”

Another beef I have with the Weather Service is the total lack of help they provide. Where was the “service” after I spent two hours clearing the drive of the first ten inches of snowfall, when they sent us another eight, which were not announced? Probably at home doing the same, I’d guess, so maybe they deserve some slack on that one.
Let’s not get started on the Weather Service’s total lack of concern about “snow load.” What are they THINKING!? Everyone knows too much snow on a roof can result in an indoor ski slope, but has that slowed down the Weather Service? No. Some folks have even been out shoveling off their roofs already. That sort of activity is normally reserved for March.

I made a special run out to our cabin last week (instead of posting a blog) to rake snow off the porch roof before it became part of the floor.  Fortunately, the bright sun and scenery made up for the chilly trip.

When I look around, however, I can’t complain too loudly. First off, at least I’m not in Valdez, where more than 322 inches (27 feet, or 8.2 meters) have fallen so far this year. Nor am I in Fairbanks, where the expected high temperature is seven degrees colder than our low. Maybe it would be better to keep my whining to a minimum and daydream about summer. It will get here, eventually.