A Cup of Coffee 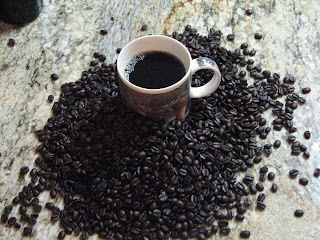 The secret to getting through the long Alaskan winters is to find something which makes you happy, and then pursue it with unabashed fervor.
This is exactly the approach my neighbor, "Blizzard Bob" (B.B.), takes.  B.B. embraces winter with an enthusiasm that could best be described as rabid.  The man aches for the first snow, and the opportunity to crank up his turbo-charged Belch-flame Spewmaster snowthrower.  He literally cheers when the borough snow plows leave chest high berms at the end of his drive.  His maniacal laugh echoes through the neighborhood when the dark of winter moves to a shade of blindness with a heavy snow.  He is the hairy legged Polly Anna of the frozen north.
What could possibly cause any individual to express such glee in the face of such adversity?  Massive amounts of coffee, and the knowledge that in all probability, everyone is home with little or no chance of escape.
B.B. fancies himself as the Peninsula's own coffee gourmet extraordinaire.  There is not a single type of coffee bean available to the buying public that B.B. has not tried, and in most cases, made an attempt to improve upon by blending in some manner.
This passion has its drawbacks.  Being a purist, B.B. won't deal with decaffeinated beans.  "You can't tell me that it tastes the same.  I don't care how they do it.  If you take the caffeine out of the bean you're gonna take the heart out of the blend."

Bob's wife has confided that at the peak of his experimental blends B.B. doesn't really sleep.  She says he simply passes out for brief periods of time every third or fourth day, twitching restlessly, depending on the strength of the blend he happens to be working on at the time.
Winter is the season of socialization for B.B., because he knows Alaskans are a lot like birds: we scatter to attend our own affairs during the summer, and group together to pass the winter in company.  Only, instead of a berry bush, we congregate around a coffee pot.  When the wind snaps like a whip against your face, and the scenery is a bleak, black and white abstract, quiet conversation steeped in the aroma of a freshly brewed pot of coffee warms the soul as much as the body.  That is, until the galloping grind gourmet shows up pounding on the door, like he did one unforgettable evening earlier this winter.

THUMP!  THUMP!  "Hello?  It's me, Bob.  Hello?  C'mon guys,  I know you're in there.  I can see the car, I know you're home.  How 'bout a cup of coffee?"
Since the presence of the car was a dead give away, and the continued pounding would have only stopped conversation anyway, B.B. was admitted.  He whirled into the room like a hyper dust devil.  His hollow, sunken, bloodshot eyes were frozen open in testimony to his latest quest for the ultimate coffee bean blend.  He carried a little paper bag clutched tightly to his chest.  His nose wrinkled immediately upon smelling our fresh coffee.
"Whew!  You boiling tar or what?  Oh no, just some of that canned coffee.  Well, have I got a treat for you!"
"Good to see you too B.B., want a cup of fresh coffee?"
"Don't mind if I do.  I'll brew it up right away.  Brought a new special blend with me just so you could try it out.  First I gotta wash the pot and the basket.  Can't leave any old oils to taint the flavor of this special blend.  Where's the dish soap?"
Turned loose with the dish soap, he scrubbed feverishly on the pot and basket to remove the last miniscule traces of any offending residue.  "Where's your distilled water?"
"Uh... I'm ashamed to admit I don't have any."
"Fine then," he was obviously put out, "but you should know that the coffee's only as good as the water it's made with.  My blend can't brew up to its full potential..."
"Well B.B., I don't want to hold back any potential here, maybe we ought to put this off until some other time when I've got the right water."
"No, no.  We'll make do for now, just so long as you know that what's good with this nasty ol' tap water would have been just this side of celestial with good water.  Just keep that in mind."
With the admonishment finished, he opened the little paper bag with trembling, caffeine generated excitement, and shakily measured exactly three scoops with his special brass "blend spoon" into the special unbleached, acid free filter he'd brought along.
"Say B.B., what're all those red and white specks in the grinds there?"
He just smiled slyly, "That's what makes it so special.  Just wait."
As all present waited for the water to drip and the blend to weave its magic, B.B. launched into his patented lecture on  different beans and what makes them flavorful, "...and with that in mind, I chose the French roast for exactly that lightly burned acrid touch, and the Columbian because of the more mellow aromatic quality.  Then, I stepped into realms of blending heretofore never explored... but wait!  Ahh... smell the essence of blending genius."
B.B. grabbed the carafe just as the coffee maker sputtered out its last gasp of steam, and quickly poured each person a cup of the new ambrosia.  "Quick, what do you think?  Nectar of the gods, or what?"
Tightly pursed lips on silent, tilted, squinty-eyed faces offered no response.  Finally, one taster after another swallowed hard.
B.B. listened intently to the first review, "Well... it's different... sorta salty..."
"Wait a minute," another taste tester interrupted, "what's wrong with your lips there?"
"Probably the same thing as yours.  Stick out your tongue.  Omigosh!  Are you bleeding?"
"No, if I was cut all that salt would sure tell me.  What gives B.B.?"
B.B. looked shocked, and stammered out that the red dye was from the secret ingredient.  "You have been treated to my special new blend: French-Columbian-Pistachio delight."
"Pistachios?  The red stain is from Pistachios?  You used the SHELLS?!"
Obviously, something had gone amiss.  The taste test had serious side effects.  B.B. tried to explain, "I was up all last night perfecting it, didn't get it just so until after noon today... tasted so good, I brewed and drank everything I'd blended.   I knew you'd want to try this, so I made some more.  Problem is, by then I was shakin' so bad I couldn't hold on to the pistachios to shell 'em, so I just ground 'em up with the beans... I mean, what's the harm?  The shells stay in the filter.  Right?"
There was no chance to answer, as at that point B.B. took one of his impromptu naps.
I'm not sure what B.B. will do for company for the rest of this winter; we've all switched to tea.

Shameless plug: If you enjoyed this post, let your friends know about it. If you didn’t, tell your in-laws. This story, and others by the author, are available in the e-book, Of Moose and Men: a skewed look at life in Alaska, available for 99 cents at Amazon and Barnes & Noble. The second collection of Northland nonsense is scheduled to come out later this year.
Posted by A. E. Poynor at 9:33 AM