The sun was rising in a clear sky and the thermometer showed seventeen below zero (twenty-seven below, for those accustomed to Celsius) while taking the day’s first load of stuff to the new house, yesterday. By afternoon the temperatures had climbed into the positive side of zero by more than twenty degrees. Daily temperature swings of more than forty degrees this time of year can only mean we’re standing on the cusp of breakup. 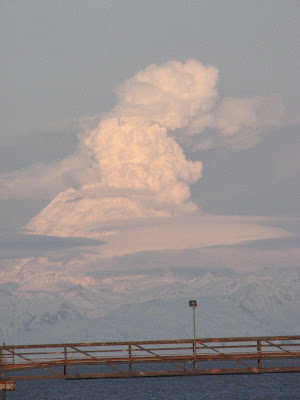 In reflecting on this past winter, it reminded me of a winter twenty-two years ago. That one also had extreme snowfall and a long stretch of bitter temperatures. In fact, that winter was much worse. Aside from the 176 inches of snow and four weeks during which the mercury actually froze, Mount Redoubt (one of our local, pesky volcanoes) erupted on a regular basis between November and April.  More succinctly: that winter sucked.  (The photo to the left is from a more recent eruption, in 2009.)
At any rate, while in the course of my wool gathering, a poem I wrote for my son about this time of year in 1990 came to mind. That winter was tough on kids. Between the ash fall (not good to breathe) and cold temps, the kids were cooped up a good portion of the winter. I don’t know if it was harder on the kids, or the parents, but “Petey’s Nose” gives a kid’s perspective.

Petey’s Nose
Oh, last September,
How the first frost made me grin.
I knew just what was on the way,
And couldn’t wait for winter to begin.
Then, by the last week of October,
It was more than I could bare:
I had almost given up dreams of drifts
When snowflakes filled the air!
Gosh, but it was glorious!
The whole wide world was white!
We stomped and packed it down by day,
And new snow would fall by night.
By the week of Thanksgiving vacation,
Things were pretty well frozen.
The boundaries for snow forts were laid,
And the opposing sides were chosen.
Spectacular battles were fought,
And deeds of valor performed.
Truces were called on a regular basis,
For hot chocolate, while fingers were warmed.
Ahhh, but those were great times.
But those times got old,
And by the end of Christmas vacation,
We were pretty much sick of the cold.
January crept along
Just like the proverbial molasses.
Things were so darn desperate,
We looked forward each morning to classes!
The grand forts we’d made were just mounds,
Neglected and buried under fluff.
The sleds and snowboards were ignored,
In favor of doing inside type stuff.
Eventually, Moms forced us outside with:
“You need fresh air and exercise.”
The cold would twist our noses,
Then freeze the tears welled in our eyes.
February was just like the poem,
It had twenty-eight slow days quite clear.
When a cold-snap descended upon us,
Playing outside, I frost-bit an ear.
After that, all of the kids would come over
And I’d show them my ear with some pride.
Most couldn’t have cared less about it,
As long as they could play inside.
As March came, my ear was all better,
And we were thrown back out into the snows.
As the gusty March wind swirled around us,
We picked Petey to frostbite his nose.
Petey wasn’t so certain,
He said it didn’t sound like much fun,
But Petey had picked out the short straw,
So we grabbed him before he could run.
Now that winter is finally over,
And April has come with the rain,
We still all go over to Petey’s.
(Except when he’s writhing in pain.)
Soon school will be out for the summer,
We’ll play ball and go fishing at dawn.
We’re hoping that Petey will heal up
And join us before summer is gone.
Posted by A. E. Poynor at 8:58 AM