In the Company of Heroes

I didn’t post last week because I was in Washington, D.C. with a group of heroes. (That is a much better excuse than the dog eating the post.)


The World War II Memorial opened to the public at the end of April in 2004. We are losing our WW II veterans at a rate of over 1,000 per day, and a physician assistant and retired Air Force officer named Earl Morse realized that many of the veterans would never have the opportunity to see their memorial. So in August of 2005, Mr. Morse organized a flight of six private aircraft to fly a dozen vets to Washington to see the memorial. From that initial flight an organization named Honor Flight Network was born. The organization has thirty-nine state organizations across the country today. Their goal is to get as many WW II veterans to the memorial as they can. The veterans’ trips are arranged and paid for by the organization.

My father is a WW II veteran who piloted B-17’s out of England. In March of this year Honor Flight Arizona contacted him with the offer of a trip. Obviously, the veterans are all in their late eighties and nineties. To help get them around “guardians” also go on the trip. (Guardians pay their own way.) My father invited my sister and myself to go along as guardians; my sister served as guardian for Dad, and I went as guardian for a friend of my father’s, an Army veteran. 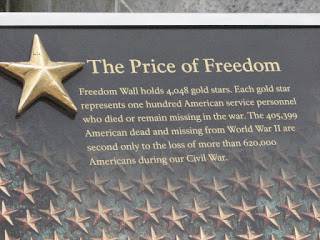 In addition to the WW II Memorial, the group toured the Capitol Building, the Viet Nam and Korean Memorials and the Tomb of the Unknown Soldier. To describe everything the veterans did on the trip would take too long for a single post, but some things and highlights of the trip are well worth mentioning. There were twenty-nine veterans in our group. The youngest was 86 years old; he signed up when he was sixteen. The oldest vet was a former Marine, almost 97 years old. There were vets from the Army, Army Air Corps, Marine Corps and Navy. 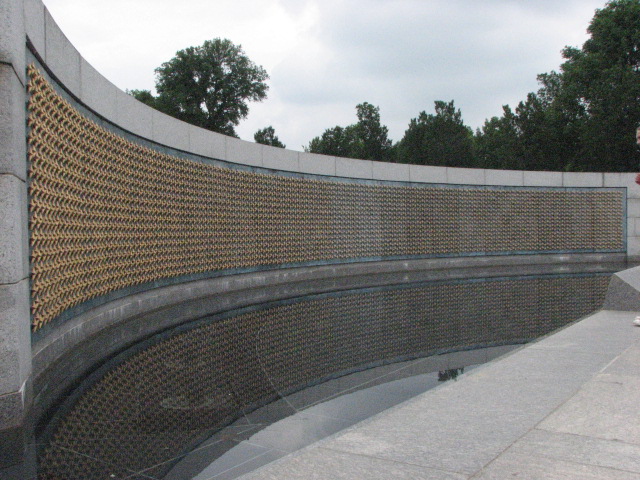 Everywhere the vets travelled, people randomly came up to thank them for their service, many of them were teens. In one instance a man at the airport shook a vet’s hand and the veteran commented he hadn’t done anything special. The stranger replied, “No, not much. You guys just saved the world.”

At the WW II Memorial, groups of tourists asked the vets to pose with them for pictures. After several groups in a row, one of the vets cracked that they should start charging a dollar a picture. I think they could have gotten it.

The most poignant moment came when we stopped at the Iwo Jima Memorial. One veteran had a bottle of sand from the beach at Iwo Jima where he fought and his friends died. As we watched, he threw the sand up on the memorial in honor of his lost friends.

Honor Flight operates with volunteers, using donations to pay for the veterans’ airline tickets, meals and lodging. If you would like to know more about Honor Flight, or would like to volunteer, donate, or nominate a veteran, visit their web site at www.honorflight.org (Be aware there are dot-com sites with honor flight in their URL’s that are not associated with the Honor Flight Network. Those operations charge fees to the veterans.)
Posted by A. E. Poynor at 1:16 PM