I reluctantly accepted an invitation to a wine tasting. Wine tasting is often maligned as a social activity strictly reserved for snobs. For that reason, I’ve not attended organized wine tastings since the days of my youth. For years, I believed wine tastings were only for people prone to sitting around in fancy evening attire, sipping from fine crystal, while holding their pinkies up high. Granted, today’s wine tasting parties are different from the ones of my youth – where we dressed in togas and walked on our lips by night’s end – they are also a far cry from a Miss Manners marathon.

Drinking wine in a finely appointed restaurant, and tasting wine at a party are different. When wine tasting, the rules of etiquette are considerably more relaxed. For instance, slurping and lightly swishing your wine in an elite eatery would be frowned upon, but such behavior is encouraged at wine tasting parties because it enhances the flavor. (There are, as I discovered however, limits to what is tolerated. One shouldn’t imitate a wet/dry vacuum while slurping, nor does one want to give the impression they’re trying to dislodge stubborn food particles from their teeth while swishing.) In fact, if a guy’s careful, he doesn’t even have to spit out his chew before the festivities begin, because buckets are placed conveniently on every table for discarding wines you don’t want. (Again, I discovered the prudent man is circumspect in utilizing the buckets, and doesn’t flaunt the convenience.)

Wines considered appropriate for current tastings are different than those of my youth. Apparently, wines packaged in boxes are infrequently, if ever, included during and evening’s tasting. Also, it is rare for any wine poured from a screw cap bottle to be highly lauded at a tasting.


When the invitation was offered, the host of the party explained to us that we should bring a wine and be prepared to “introduce” it to the group. Since he had already been forced to describe suitable attire, explain what wines were appropriate and vaguely cover some of the slurp and swish rules (although not in enough detail to preclude all embarrassment), I was reluctant to press for a detailed explanation of “introducing” wines.


I had trouble envisioning what, exactly, introducing a wine meant. I could just imagine myself standing up, holding my offering for view and launching into a formal, detailed introduction.

“Howdy! I want y’all to meet my little buddy here, Mr. Yeasty. He’s from the Ripple family. Neat looking bottle, huh? He’s got a nifty label with lots of color, and fancy print. Mr. Yeasty is a California wine, and comes to us from The Encino Plant of Barfin-Goode Industries- purveyors of fine wines, distilled spirits, industrial solvents, and formaldehyde. This wine is made from partially natural ingredients, with a few man-made fillers. It’s definitely wet, and should be kept off all finished surfaces and most synthetic fibers. The manufacturer recommends testing dentures for staining in an inconspicuous spot, before taking a big slug.”

Fortunately, on the night of the party, there were several introductions before Mr. Yeasty had to make his debut. I quickly gathered that there was really little to the introduction other than stating the wine’s name, saying where it was from, what color it was and what foods it would go best with. Couldn’t be simpler.

“Mr. Yeasty... California’s L.A. industrial district... sorta reddish purple... anything with lots of garlic and/or onion to tone it down a little.”

Following the introductions we moved right into the focal point of all wine tasting parties: tasting, and then describing the wines in the most esoteric and oblique terms imaginable.

Slurp... swissshhh... “Ah, yes this has an excellent bouquet and delightful body.”

“Quite. It’s tender, yet distinctive in its dryness.”

“Exactly. It’s not at all overstated. A good paring with light pasta dishes.”

I noticed that being the first to describe the wine made it easy. But if you were down the line, suitably fancy and meaningless descriptions got a little hard to come by. At one point, things got a little testy amongst the tasters when someone wanted to wax poetic over the wine.

“Mmm... yes. This is a unpretentious little cabernet. It’s fruity without being overpowering, and possesses a delicate, yet distinct bouquet... its dryness is enhanced by the underlying woody essences... It is reminiscent of the ’92 vintage...” 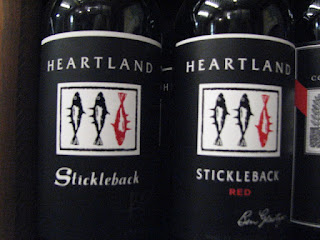 “Hey! Hold up there! You’re hogging all the good descriptions.”

After a few samples, and being last in line, I found myself grasping for anything that could be even remotely associated with the taste of wine.

“This is truly a delightful wine. While not entirely anatomically correct, it could be described as full-bodied with a large nose and buck teeth. I’d have to say this wine would be an excellent choice to accompany frozen pizza pockets. It is, no doubt, popular among those with poor dental hygiene, and would be unsurpassed as the follow-up to a shot of cheap tequila.”

I suspect my assessment was overblown. Subsequent invitations to wine tastings have not been forthcoming.

Shameless Plug: This piece received an award from The Alaska Press Club, and is in the running for inclusion in the next volume of the "Of Moose and Men" series. The first volume is available as an e-book at Amazon for only 99 cents.
Posted by A. E. Poynor at 5:48 PM