Good lord! The real campaigning hasn’t even started, and I’m already sick of the name calling and mud-slinging!
I have conducted a somewhat unscientific poll of people’s attitudes toward the election ads that are assailing us.  When seventeen average folks were queried as to what they thought of the current crop of commercials revolving around candidates, two rated their feelings as slightly negative, three rated their feelings as very negative, five said they were extremely negative in how they felt, and the rest were still swearing and throwing things when I ran away in fear of my life.  (This poll has an error rating of plus or minus something or other.) 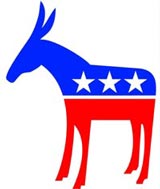 After listening to some of the ads, one is left wondering what kind of smarmy individual signs up to produce political ads.  Do you suppose those folks have any sort of personal beliefs, or are they entirely mercenary?  How can they justify the product? It’s not hard to imagine how such companies rationalize what they put out.
“We’re an apolitical advertising agency, actually.  We don’t follow any political party tenets, and would never play favorites.  Frankly, we don’t really care who wins.  As long as there are two- or even better, more than two- people who don’t get along, and are willing to pay major bucks for us to deconstruct the truth, spin a position, misinterpret an opponent’s public statement and generate believable character assassinations, we’re perfectly happy.  Really, ya gotta love the democratic process.”

With that in mind, I’ve decided to take matters into my own hands and write the top ten political ads I’d like to hear.

Number ten: “My opponent claims I haven’t worked hard for Americans.  Do you have any idea what it’s like to sit through those boring state dinners, all the while trying to act totally entranced as some long-winded blow-hard with a foreign accent goes on interminably about some special interest project?  YOU tell ME I haven’t worked hard.”

Number nine:  “My opponent has accused me of intemperate behavior.  Well, buster, to be perfectly honest, the only way I can get through some of those baby-kissing photo-ops is to get half-toasted.”

Number eight:  “My opponent claims to have created over 400,000 jobs.  As if!  He doesn’t have nearly that many friends and family!”

Number six:  “We’ve all heard the twisted, distorted and erroneous figures my opponent has tossed out, all in a vain effort to counter the figures I’ve supplied to support my position.  Well, as they say, figures lie and liars figure, and obviously there’s a liar in this race figuring that you good voters will figure out which liar figured first, and... umm... that is to say... oh, never mind.”

Number five:  “This is Willy B. Lected, your candidate of choice, and I’ve approved the following commercial.  Of course, I don’t have any actual input because my handlers think my I.Q. is about five points lower than a sweet potato and they don’t want me to get confused, but I approve of it nonetheless.”

Number four:  “If elected, I will work tirelessly to open ANWR.  I will continue to support the careful and environmentally responsible development of our natural resources.  I will support and introduce legislation that will provide the means and financing to expand our economy by utilizing the many, and varied, natural gifts bestowed upon our great land.  But you folks gotta realize, there’s a bunch of bunny-hugging morons hanging around Washington.  I’m working with a tough crowd.”

Number three:  “When elected, I will work ceaselessly to heal the divisions that have been created during this rancorous campaign.  I will reach out to the members of the other party to form bonds and alliances born of bipartisanship in an effort to bring forth the best we can for our country, our nation, which must stand united in these difficult times!  Of course, if I’m leader of the majority party, all that nonsense is off.”

And now for the number one political ad that I, personally, would most like to hear:  “Neener-neener-neeeeener!  Liar, liar, pants on fire!”