I’ve been playing hooky for the past couple of weeks. July is salmon season, and I’ve been chasing them up and down the river trying to get some put aside for the winter. As far as salmon runs go, this has been a weird year. The king, or Chinook, salmon return has been the lowest since they started counting them in 1984. The red, or sockeye, salmon run has been above average, with over 1.5-million up the Kenai.

Of course, the two user groups - sport and commercial - were quick to blame each other for the low return of kings. People always want to assign blame, particularly to someone else. Truth of the matter is it’s not just the Kenai River with low returns of king salmon, it’s statewide; all the rivers are experiencing low returns. (Oddly enough, the Lower 48 runs of kings are setting records.)

Watching all of this reminds me of when the Feds threatened to take over all fish and game management from the State. The prospect of the Feds taking over the State’s successful management of fish stocks should have, one would think, unite Alaskans and made them cooperative. (The salmon stocks were managed by the Feds before we became a state, and the stocks were dwindling. In 1959, after statehood, Alaska took control and the stocks recovered.) Such was not the case. Each user group - sport, commercial and subsistence - argued they should receive preference in allocation.

The petty bickering and obstinate refusals to compromise by each user group put the fisheries in real danger of allowing Federal takeover. In the end, fortunately, Alaska retained control of the fisheries within state waters. The following is a poem I wrote at the time to reflect what was going on in the late 1980’s, but with the current finger-pointing and bickering it is just as pertinent today. 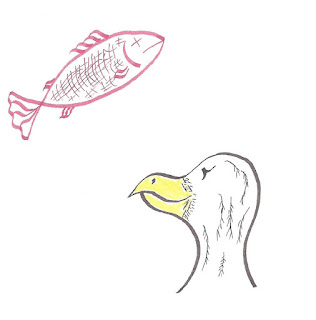 The salmon did what salmon do (sometimes)
When traveling up the murky Kenai.
It shot itself onto the bank
To flop and splatter in the mud,
Instead of spawn and die.
The seagull did what seagulls do (all times)
When cruising above the murky Kenai.
It shot itself down to the bank
To hop and totter in the mud,
And help the hapless salmon die. 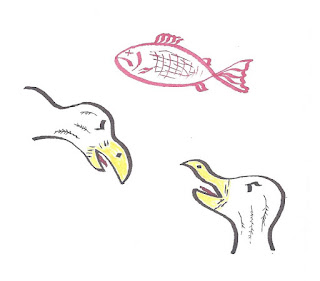 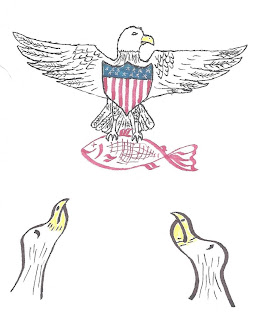 Claims continued, and rose to allegations
In the circling standoff that ensued.
Two seagulls hopped and tottered in the mud
To feed on principal, instead of food.
There was plenty for both,
But both wanted it all.
Who won was the only concern.
That is, until the eagle came,
And left two hungry gulls to learn
Not to act like men.
Posted by A. E. Poynor at 10:19 AM