Had it covered... I thought. And a little Christmas


Someone once observed, “Indecision is the key to flexibility.” I must be very flexible, indeed.


A couple of posts back, I asked opinions on three photos for use as a cover on a novel. In the post I also mentioned conventional wisdom suggests the use of a professionally designed cover. (Bear in mind, I could never be accused of having wisdom, conventional or otherwise.)

There were more comments on those three photos than any other post on the blog. And I would like to thank everyone who took the time to comment. Most of the comments indicated the shot I was leaning toward would be the best post. Then indecision stepped in.


“Why not use a professional photo?” the nasty little voice on my shoulder asked.


There is a professional photographer I worked with when writing for the paper, M. Scott Moon. Everyone in our little area is familiar with Scott’s work. I feel lucky enough to also call him a friend. To watch Scott work his photographic magic is amazing.


We did a story on dipnetting at the mouth of the Kenai River one summer. As we walked the beach, dodging the aerial bombings from the thousands of seagulls drawn to feast on the fish heads, Scott was shooting away. As a particularly large flock of gulls rose from the sands, off to my right, I glanced in that direction. There was Scott, snapping merrily away as the flock rose from around a young man sitting on an ice chest, reading a book. Many would say the resulting photo was a matter of luck. Those are people who don’t know Scott. He had positioned himself to take the picture so that when the birds all lifted off they created a frame around the young man. (As an aside, I went over to interview the guy with the book. He was still wiping the gull crap off the pages when I got there. Obviously, Scott had skimmed a beautiful moment from ugly reality.)


Thinking about using a professional photograph immediately made me think of Scott’s work. Checking out his website was an embarrassment - that I would even consider using one of my own snapshots. (Check out Scott’s photography by going to: http://moon.photoshelter.com ) It didn’t take long to conclude I would have to reconcile myself to simply putting text on the cover, and the less intrusive, the better.


With the indecision about the cover resolved, it was time to finish up the HTML work for the book. I can say this about HTML: there is no indecision about working with HTML, you WILL pull out your hair. (I’m hoping those bald patches will fill back in eventually.) The last of the weeping and wailing faded away a couple of days ago, and Somewhere West of Roads is now available through the U.S. Amazon. (It will be available in overseas Amazon sites in a few more days.) You can check it out, and read a portion of it by clicking here: SomewhereWest of Roads. (And if you weren’t aware of it, you don’t need a Kindle to read the entire book. There are free downloads for the Kindle app for iPad, iPod, PC’s, Mac’s, you name it.)


Okay, the shameless plug is over. Let’s have a little Christmas cheer with a less than traditional poem! 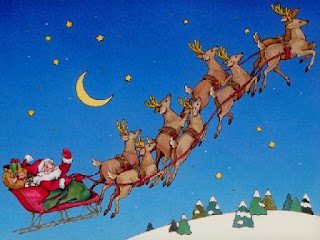 The Night Before Christmas
(With additional apologies to Clement Clarke Moore)

'Tis the night before Christmas, and although Dad is tired,
He'll be up to the wee hours, 'cause some assembly's required.
The tool box is ready, the parts are laid out;
With instructions unfolded, Dad's mind fills with doubt.
The children are sleeping, they're sure things are right,
Their slumber unbroken as Dad works on through the night.
And Mamma will be helping, as best that she can
But it's mostly a job for the family's old man.
When out on the floor there is dumped such a clutter,
He counts all the pieces, and Dad's heart starts to flutter.
Shaking all of the boxes, he lets fly a snort,
"Those dirty dweeb packers!  Two lock washers short!"
The light is turned up on the bright kitchen floor
As Dad carefully recounts the pieces once more.
When what to his wondering eyes should appear
But Mom with the washers saying, "Hon, they're right here."
With a Phillip's screw driver, a twist and a flick,
The first toy is finished and wrapped double quick.
More rapid than eagles, Dad's curses they flow
As he grumbles and grouses, eight more left to go:
"Now, part A to part B, match top side to bottom,
On left side, cross over to right side and lock 'em,
To the top of the front, to the top of the back...
I'm going nuts, going nuts, going to crack!"
So Dad balls up the instructions and throws them away,
He'll defeat this small obstacle by doing it his way.
So out comes the hammer, to make things fit right,
Dad bludgeons and pounds parts until they are tight.
And then with a tinkling, it all falls apart.
With gnashing and wailing it's back to the start.
As he draws a deep breath and sucks down a cold brew,
Dad slumps to the floor, wondering what he should do.
He is psyched-up to beat this, he simply can't quit,
With a little more brute force things are certain to fit.
The passel of pieces he's flung 'round about
Are picked up and piled and sorted back out.
His eyes, how they're blazing! his lips are drawn tight;
His cheeks are now flaming; he's ready to fight!
His gnarled hands are drawn up in fists that are taught
And his wrinkled brow shows that he's lost deep in thought.
Dad works with the passion of one who's possessed,
The hours march on, but there's no time for rest.
As the clock on the wall chimes five times in a row,
The last of the goodies is ready to go.
As Mom finishes wrapping, and puts things in place
Dad sits and stares numbly out into blank space.
The slump of his posture, the kink in his neck,
Give hint to his burn out, he's a physical wreck.
The bags of his eyes hang down to his belly,
He's crossed eyed and bow legged, his brain is like jelly.
The children awaken and pour in the room,
Their patter and chatter lifts Dad from his gloom.
After each gift is examined, and declared to be neat
Dad struggles to rise up and make a retreat.
But they hear him exclaim, ere he slinks out of sight,
"Happy Christmas to all. And now, to all, a good night!"