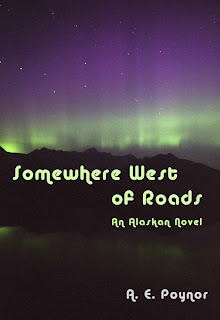 It’s been awhile since the last post. It’s been hectic at the house with the new puppy, particularly when combined with the arrival of breakup. When the snow finally begins melting for serious, any exposed patches of terra firma become a mud version of the La Brea tar pits. The past ten days have been a constant string of puppy washings.


That being said, (A.E.: Hold please, muddy puppy wants back in… Readers: Hum-dee-dum-dum… A.E.: Sorry, I’m back. Where was I? Oh, yeah.) it’s been difficult to get a post out. In an effort to get something worthwhile out, this week’s post is going to be an excerpt from my novel Somewhere West of Roads. You can read the synopsis on the book’s Amazon page. I know this is long, but hopefully you’ll enjoy it.


This scene introduces the two male main characters in the book, John and Harley. At the moment Harley is drunk and catching a ride with a friend. This picks up after Harley’s friend has pulled John’s car from a snow bank.


Pete looked at the paper John handed him and scanned the instructions. He also noticed Harley’s name on the list at the top of the paper. He was familiar with most of the other names as well, and was immediately suspicious. “That will get you there just fine,” Pete said handing the paper back. “What are you doing in Nikiski?”

“It’s a long story, but my uncle recently died and I’m supposed to look some things over for his estate. Maybe you knew him, Hank Grant. I guess most people called him Hardrock.”

“Sure, I knew Hardrock, but I didn’t know he had any family. I was sorry to hear about his passing. Helluva guy, Hardrock.”

“Wha’ ‘bout Har’ock?” Harley called from the truck as clearly as his spinning head would allow.

Pete excused himself and stepped quickly to the passenger side of his truck and whispered sharply, “Shut up. This guy says he’s Hardrock’s nephew. You understand me, Harley?”

“Everything okay?” John called out.


“Everything’s good,” Pete shouted back, “I’m just telling my buddy you’ll give him a ride.” He turned back to Harley and continued his whispering. “Harley, this guy has a list with your name on it. He’s here about Hardrocks’s estate. Hardrock must have left Last Chance to him. He might be your new boss. Don’t tell him who you are until you get a chance to sober up, okay? Okay?” Pete thought he saw a flicker of comprehension in Harley’s drunken gaze.

“You need any help getting him in the car?” John called out.

Pete jerked the door of the truck open, and Harley pitched himself out, made a grab at Pete and landed spread-eagle on his face. Pete could hear the man in the car laugh. He grabbed Harley’s collar and hoisted him up.

“Tha’s a tall truck ya got, Pete,” Harley mumbled as Pete slung Harley’s arm over his shoulders and dragged him toward the car. “An’ tha’ brandy? Better stay ‘way from it.”

Pete assured Harley he’d leave the brandy alone as he dumped him into the seat of John’s rental. He shut the door and walked around to John’s side of the car as Harley fumbled with the seat belt.

“I’ve got to get going. He’ll be fine. You need to drive slower than you’re used to on these roads, but I guess I don’t need to tell you that, now.”

With that, Pete returned to his truck, hoping Harley had actually understood what he had been saying. He waved to John and continued on down the highway to the first of many parking lots the night held in store.

Harley had a hard time doing it, but finally managed to get his seat belt fastened. John watched him with a combination of humor and sad recollection.

John shook his head, and pulled slowly out onto the highway to turn north. He focused all of his attention on the road, certain the first moose had a suicidal friend lurking about. He kept the speed under forty-five and drove on in silence.

Harley’s head was spinning. The snowflakes flashing in the headlights of the car weren’t helping the situation. The sweet brandy he’d gulped down wasn’t sitting well on his stomach, either. He understood fully what Pete had said. He glanced occasionally at John, and tried to focus on the man. His eyes weren’t cooperating in the effort. He felt hot, and needed some fresh air.

“Mind if I roll the win’ow down some?” Harley finally asked. “I’m not feelin’ so good.”

“Go ahead,” John replied, “we don’t want no puke in the office.” He laughed to himself.

“Nothing. Go ahead and roll the window down. Let me know if you need to puke, and I’ll pull over.”

Harley rolled the window down half-way, and put his face where the wind would blow directly on it. It helped push away the nausea.

Thinking maybe the drunk needed some conversation to preoccupy him, John tried striking up a conversation. “Looks like you’ve been out celebrating.”

Even though he was clueless as to what the drunk meant, John couldn’t help but laugh along with him. “Well, what did you end up celebrating?” he asked in an effort to keep the conversation rolling.

Harley caught his breath. “Foun’ out I didn’ lose my job, I got a new boss.” Harley laughed even harder.

John shook his head. He wondered how many conversations like this one he’d had in years past that he didn’t remember.

Wind in his face, or not, Harley was feeling sick. Before he could get his lips to form the words to stop the car, he was throwing up.

“Oh, shit!” John shouted as he pulled the car over and slid to a stop.

Harley pushed the door open, leaned out and finished retching on the side of the road. He sat up and slammed the door closed, then wiped his mouth with the back of his hand. “S’okay, s’okay. Mostly on the floor mat. No prob. Jus’ some poppers, anyhow.”

“Yup. Feel much better. Clean ‘er up when we get to the Shuffle.”

John toyed briefly with the idea of pulling the mat out, but decided it would best wait until they got somewhere he could see what he was doing, and after he got rid of the drunk. He pulled back onto the highway to continue on down the road.

Harley felt much better after puking. With the cold air whistling through the car, his head was clearing up. What Pete had told him about the man driving flashed back into his consciousness. That man could possibly be his new boss, and he had just thrown up in his rental car.

That struck Harley as the funniest thing he’d ever thought up, and he broke out into another round of hysterical laughter. John didn’t want to know what was so funny this time. He just wanted his day from hell to come to an end. The snow had all but stopped falling, and he drove on, pushing the car along as fast as he dared. Finally, John caught sight of the sign for the Shuffle Inn.

John pulled off the highway and up to the building. There was only one other vehicle in the parking lot, an old, battered truck. Immediately to the left of the Shuffle Inn, stood a two-story building which looked like a small, rundown apartment building. However, the painted wooden sign on top of it proclaimed it to be a hotel.

Harley fumbled with his seat belt latch and started to climb out of the car, hanging onto the door for support. John stepped out of his side of the car and started around to help Harley to the entrance of the bar, when he saw a large wolf-like dog approach from the front of the parked truck. The animal lowered its head as the hackles on its back raised slightly. It approached Harley, bared its teeth and growled ominously.

“Git!” Harley shouted at the animal. “Scram, ya mutt.” The dog snarled at Harley menacingly in response. “I mean it, sombitch!”

John stood frozen, unsure of what to do. He didn’t want to see the drunk get mauled, but wasn’t at all willing to face a dog that large himself. When the dog turned its attention to John, its demeanor changed immediately. His tail wagged, his lips relaxed and his tongue lolled out. He trotted up to John, sniffed him gently, then nuzzled John’s gloved hand.

John heaved a sigh of relief. He looked toward Harley to see how he was doing. Harley was hanging onto the door for stability.

John patted the dog’s head, and the dog responded to the affection by wagging its entire body.

“He seems fine, now,” John said, continuing to pat the dog’s head. “Do you know whose dog it is?”

“Yeah,” Harley replied in a disgusted tone, “it’s mine. Sombitch never has liked me.”

At the sound of Harley’s voice, the dog curled its lip one more time, then slunk off in the direction of the hotel building.