I doubt seriously if there is a parent who hasn't experienced this sort of mischief on the night before Christmas.

A Visit From St. Nicholas
(With additional apologies to Clement Clark Moore)

‘Twas the night before Christmas, and all ‘round the place,
The kiddies were rampaging: ‘twas a regular rat race.
The stockings were knocked down by Dad’s easy chair,
As the crumb snatchers ran wild on a continuous tear.
The children, admonished to stay in their beds,
Kept sneaking about, driving us out of our heads.
With mom on her last legs, and I almost napping,
We settled to the business of last minute wrapping.
When up on the stairway there came a light patter,
Then giggles and snickers and house monkey chatter;
Away from the wrapping I jumped with a roar,
“Back into your beds!  Don’t come out anymore!”
The silence lay softly, like new-fallen snow,
As the nose miners plotted a sortie below.
While we busied ourselves with the paper and tape,
The linoleum lizards attempted escape.
With the stealth of a train wreck, they slid down the stairs,
Hoping the old folks would be caught unawares.
More attuned than a beagle’s, a father’s ear’s trained,
And I hooted an hollered, and called them by name:
“Yo, Billy!  Hey, Trudy!  My son and my daughter,
You’re sneaking and peeking, and now in hot water.
To the top of the stairs, now march down the hall,
Get into bed.  Into bed, once and for all!”
As skittery kittens, before a broom fly,
Each kiddie did scramble, with twinkling eye,
Up to the bedrooms to snuggle and wait,
For Santa’s arrival, before tempting fate.
Mother and I returned to our wrappings,
Buried in paper and ribbons and trappings.
Mounds of the stuff was littering the table,
We sat folding, and creasing, then sticking the labels.
We were dripping in sweat, from our head to our feet
The pressure was on, with a deadline to beat.
Our eyes, they were glazing, our hands they were shaking,
We couldn’t believe just how long it was taking.
There was a passel of goodies to wrap laying there,
And of the dozens of shapes, not a single was square!
There were octagons, hexagons, things that were round.
Normal shapes?  Easy shapes?  Not to be found!
With the intensity rising, and it getting quite late,
The situation degraded to heated debate:
“Dear, you wrap up this one.  I can’t get it right.”
“You’re still stuck on that one?  You’ve been at it all night.
Just roll paper ‘round it, and slap on a bow,
The kids aren’t that picky, they won’t even know.”
With sleepy heads nodding, we thought a break best,
While the coffee was brewing, we stretched out to rest.
Before we could help it, we fell fast asleep,
With presents and paper all left in a heap.
Lost deep in our slumber, not a sound did we hear,
As a small, quiet figure shyly inched its way near.
Then, with a skill born of magic and lore,
The presents were wrapped up and set on the floor.
We woke to his call and Christmas tree light,
“Happy Christmas to all, and to all a good night!” 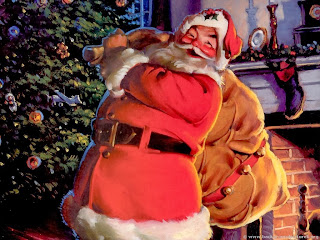