Nome, Alaska in the Fall


Last week I left you all at the Safety Roadhouse, about twenty miles out of Nome, where Dan and I stopped off for a cup of coffee. Tom the barkeep seemed almost put out because until we showed up he could justify closing shop for the day. Several times he mentioned his ride back into town was on the way. We took the hint, finished our coffee, and headed back into the wind and rain.


As mentioned last week, there was a tremendous surge tide associated with the storm we were enduring. We continued on to the Solomon River bridge to see what effect the surge had on “The Train to Nowhere.” The train to nowhere should not be confused with Alaska’s other “nowhere” item, the proposed, and ultimately abandoned, project to build the Gravina Island Bridge in Ketchikan, Alaska.


As part of the gold rush shortly after the turn of the 20th Century, a railroad was proposed to run from Nome to Solomon and on to the gold mines in Council, Alaska. It was a great idea because it would provide transportation across the Solomon River, replacing the small ferry used to cross the Solomon. Unfortunately, the kit and caboodle was washed away in a huge storm in 1913, leaving the locomotives stranded on the far side of the river. The size of the surge tide during my visit is demonstrated by comparing the two pictures. In 2014 the ground was dry enough to walk on to examine the locomotives. Not so this year.


After standing in the slashing rain for a few minutes we decided to head back to town. Hard rains frequently cause washouts on the roads and we decided it would be better to spend the night at Dan’s house, as opposed to hunkered down in his truck while waiting for the road to be made passable again. On the way back, we noticed the Safety Roadhouse was still open. Obviously, Tom the barkeep was still waiting for his ride. That’s bush time in Alaska. “On the way” translates to, “Sooner or later, definitely before next week, my ride’s going to show up… if he/she remembers.”

Just before going into Nome, we stopped at the mouth of the Nome River. Something was sticking up out of the sand. Approaching from the downwind side was a bad idea. It was a dead walrus. I was tempted to grab one of the flipper bones, but figured it would draw in cadaver sniffing dogs from miles away at the airport on the way home.


“Paging A. E. Poynor. Mr. Poynor, please report to the nearest TSA agent. Your luggage has been isolated for inspection, but we ain’t touching that bag.”

The weather improved on the second day of my visit. The winds were reduced to merely howling as opposed to screaming, and the rain had abated to intermittent downpours. Comparatively speaking, it was lovely. We headed out the Nome-Teller Highway (again, highway means graded gravel road) to try and scare up some ptarmigan. Once we were inland a way, the wind died down to a stiff breeze and the clouds lightened up.  Just past the Sinuk River (pronounced sih-NOOK) we hit the ptarmigan jackpot. Since Dan let me shoot first last year, it was his turn. What ensued will be forever remembered as the “Great Ptarmigan Massacre of 2015.” At least by the ptarmigan. Dan is a bird shooting machine, bagging five. When it came my turn I displayed my conservationist tendencies by practicing flush and release. No birds were harmed, by me anyway, in the making of this blog.


The countryside around Nome is littered with remnants of the gold rush. Bucket dredges - huge, floating gold sluicing machines - dot the various creeks and rivers flowing from the mountains. These huge contraptions literally created their own ponds for floating as they worked their way up small flowing streams. In the front of the dredge was a bucket line which was a continuous loop of buckets linked on a belt mounted on a maneuverable arm. The buckets scraped gravel and dirt up and deposited it in the sluice boxes located in the building of the dredge. The tailings were run out the back of the dredge on a conveyor belt, also maneuverable to be deposited behind the dredge. Those tailings acted as a dam for the pond where the dredge floated. The dredge worked its way up the valley until it was shut down. At that point, the dredges were left to rot and fall apart. It cost too much in effort and money to transport them elsewhere. The dredge pictured here is located 57 miles out of Nome on the way to Teller. You can see how small the creek was. 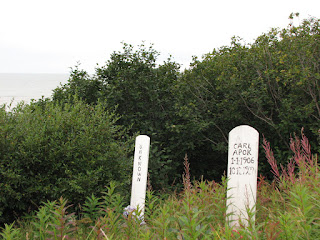 Along with gold mining equipment, random graves can be found. We came across several while driving the roads and wandering about. Nome has an official cemetery, but lacking roads and modern transportation you can imagine the difficulty of getting the deceased to town one hundred years ago. Where you dropped was frequently where you were planted.

“Pete? You suppose this is close enough? Carl’s getting a little ripe.”

“No, we ought to take him all the way into town.”

“Well, then, swap ends with me. You walk on the downwind side for awhile.”

“Now that I think of it, this is a pretty good spot.”

Like any “rush,” there were adventurers flocking into the area. Often, nobody knew who they were when they were found. Consequently, “Unknown” is a popular family name on markers.

It would be great if I could wrap this up by recounting a grand adventure, but other than meeting a group of very friendly foxes, and encountering less than friendly musk ox, little happened. The day before I left the storm finally blew itself out, and on the day I left another storm blew in. That’s Nome in the fall.