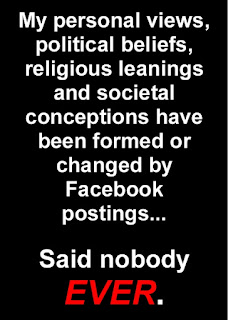 The latest poll of interest to me is not who is in the lead for the presidential race, but how many people are tired and disgusted with the whole affair. For those of you who are interested, it polled at 82% of the American public are sick of the entire thing and want it over.

"Social media," e.g.  Facebook, Twitter and other forms of instant connection in the vast sphere of intellectual vacuum called the internet, have been ablaze with partisan support of one or the other candidates.

The vitriolic vomit spewed forth from both sides has been an affront to anyone who wants to maintain a sense of humor.

Below are a few postings I have made in observation of what has been taking place. As always, I try to keep it light, but I'm sure my leanings show. 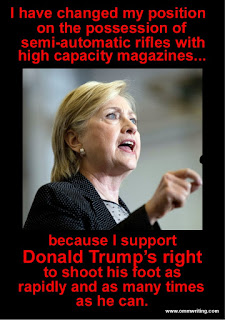 I posted this during one of those periods that Republican nominee Donald Trump seemed incapable of keeping his foot out of the way of a working firearm. (For those overseas, that may be unaware of the intense debate over American's Second Amendment right to bear arms, Clinton is considered "anti-gun." She has repeatedly called for banning semi-automatic firearms and large capacity magazines. It also alludes to an American phrase, "shooting yourself in the foot" as making an extreme gaff.)

This seemed funny, to me at least, because it would be an extreme flip-flop for Clinton, but a very wise move politically. 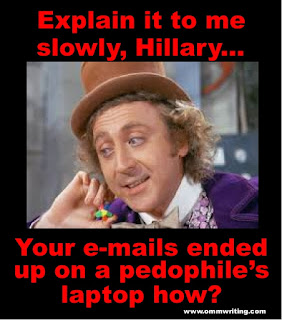 I guess this could be construed as being somewhat snarky, taking a shot at Clinton's e-mail issues. However, you have to admit that it's kind of funny taking an icon from a children's film and tossing in the pedophile line. Let's face facts, folks, Anthony Weiner by virtue of his "sexting" exploits with a 15 year-old makes him a pedophile. It is also weird that Clinton's e-mails are mixed in with various pervy messages from Mr. Weiner.

DISCLAIMER: I DO NOT think pedophilia is funny. (Personally, I believe neutering pedophiles with a rusty razor blade, without benefit of anesthesia, too good for them.)  Please don't fly off the handle and send me hate mail, or get all bent out of shape. 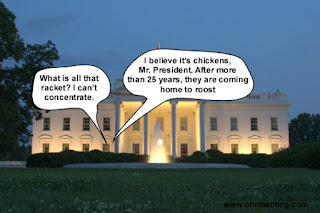 This latest post is based on the continuing issues from Clinton's past. Between the e-mails, evidence of both Clintons' "pay for play" dealings, investigations into the Clinton Foundation, etc., it seems likely that the chickens will, indeed, come home to roost.

God help us all if Hillary Clinton is the president at the time.


NOTE TO READERS: This will be the final post about the move from Alaska to New Mexico. It’s time to move on to more current things such as the battle of the barn bats and battles with batty neighbors. Click the links to read the first post, or second post if curious about how we got to this point.

We arrived in Silver City early in the afternoon on March 8. Anxious to get to our new home, we declined the generous offer of our friends to spend the night at their house and went out to the new homestead.

Spring in New Mexico, particularly here in the mountains, offers a tremendous spread in temperatures between day and night. The bright sunshine (pale former Alaskans call it brutal sunshine) during the day raises the temperature to the upper sixties. At night, the clear, dry air allows the temperatures to plummet to freezing. This has an effect on cold-blooded creatures such as lizards. In the heat of the day, lizards scamper about occupying their time with lizardy activities like sunbathing, eating bugs and doing pushups (apparently, lizards are all about physical training). At night, they seek protection from the cold. Hiding under rocks heated by the sun works, but for sheer, luxurious comfort a house with in-floor heat can’t be beat. A warm, vacant house is a thermal magnet for chilly lizards.

The problem with lizards is they aren’t the brightest animal in the world. They are very clever at finding a way into a house, but aren’t much at navigating a way out. Consequently, when we arrived in March there was a reptilian welcoming committee. Most scurried for cover when we walked in, which the dogs thought was great sport, but there were many who had overstayed their visit and had perished. Little desiccated lizard bodies littered the floors.

The first order of business was to sweep up the dead ones and round up the live ones for eviction. Watson, the little dog, was invaluable in flushing them out of hiding so I could snatch them up. Holmes, the big dog, was of no help. He would occasionally swat at one with his paw which, more often than not, left a detached tail wiggling on the floor. Following an hour, or so, of manly lizard hunting I declared the house a lizard-free zone.

Not so. Over the next few weeks indoor lizard sightings and evictions (when I was fast enough) continued at a pace of roughly five per day.

While Mrs. Poynor claims not to be afraid of lizards, she won’t handle them and has been known to emit loud, high pitched sounds when surprised by an unexpected lizard. One managed to find its way into the laundry basket and elicited a startled shriek. A day later, while moving furniture in the second bedroom five little burglars scampered from under a couch resulting in a respectable Irish clog dance. Shortly after that, a crystal shattering scream came from the sewing room when Mrs. Poynor lifted some cloth off the ironing board and one of the reptilian invaders ricocheted off her in a frantic dive for freedom. That was the last straw. Figuring out how they were getting in, and correcting the breach, became a top priority.

Following the initial roundup, the majority of lizard activity had been restricted to one end of the house, mostly in the second bedroom. As I pondered the possibility of a gap created by the Saltillo tile at the threshold to the door leading outside, a head poked out from underneath the threshold. Bingo!

“I just figured out where the lizards are coming in,” I announced proudly while rummaging through the tool drawer.

“Good. What are you going to do about it?”

Producing my caulking gun and a tube of sealer I promised firmly, “I am going to build a great, beautiful silicon wall to stop the entry of illegal reptilians. Trust me.”

After pumping almost an entire tube of sealer under the threshold I was confident the invasions would cease. However, two hours later I walked into the room and found a lizard just inside the door. It didn’t run. In fact, it didn’t even move. It couldn’t because its head was glued to the tile. Forensic examination found the lizard to be expired due to its head being encapsulated in silicon sealer.

I guess lizards can’t back up, and this particular one pushed its way through the uncured silicon, covering its head and suffocating for the effort. After plugging the hole the lone casualty of the Great Lizard Roundup had created, we have not had any further indoor lizard issues. Let’s not talk about the centipede… just yet.
Posted by A. E. Poynor at 8:19 AM No comments: